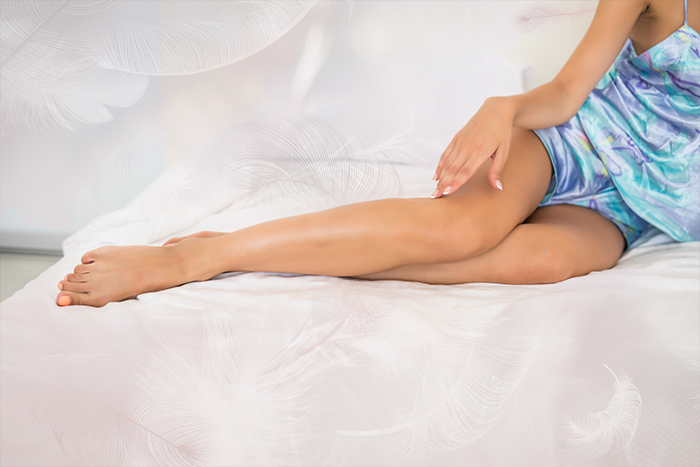 Waxing is a hair removal treatment in which we remove hair from the root with strip wax. After waxing, the skin is treated with an oil to protect it from the wax, then we use an after waxing oil that relaxes, calms, and removes wax residue. To achieve proper hair removal, the hair must be at least 1/4 inch long. Trimming is not advised.

Waxing has its origins in Egypt. The bodies of females in Ramses III's harem were said to be smooth & hairless about 1150 BC. Thus, body waxing may have been done in Egypt as early as 3000 BC. Legs and underarms were the most bothersome locations.

Since the 1980s, the number of women waxing their bodies has increased. Intimate waxing (also known as Brazilian waxing) is popular, following after legs, underarms, facial, and back waxing. The best part is that it can be done from the comfort of your own home! And if you don't feel like doing it, salon services at home are always available!

Will my hair regrow thicker, darker, or heavier than before?

No, it isn't going to happen. Waxing removes hair from the root, weakening it in the process. Waxing, on the other hand, will make the hair finer and sparser if done frequently.

What are the advantages?

(1) Skin that is even and smooth - Waxing leaves your skin feeling smooth and even, which is one of the most significant advantages. Waxing gets rid of unwanted hair and gets rid of any dry or dead skin cells.

(2) There will be no cuts - Waxing eliminates the possibility of cuts and nicks resulting in shaving scarring.

(3) Scab-free skin – Waxing altogether eliminates unwanted hair from the root. Shaving, on the other hand, might leave your skin feeling harsh and abrasive due to stubbles.

(4) Hair regrowth is slow - Waxing causes your hair to regrow slowly, taking 4 to 6 weeks on average. Many people also claim that their hair has become finer.

But what if you have sensitive skin? Well, you don't have to be worried about that part, just follow the next steps!

Remember that waxing irritation can be caused by sensitive skin, a histamine reaction, or maybe an allergic reaction, but it can also be caused by contraindication.

Before waxing, have a comprehensive consultation to rule out any contraindications. Many skin care treatments, both over-the-counter and prescription, have ingredients that thin the skin and may contribute to waxing sensitivity. The skin is not reactive, but it's become hypersensitive due to the products that have been used. Waxing can still be done; merely stop using the product before doing so. This could take anything from 2 to 14 days, depending on the component.

While waxing triggers a natural inflammatory reaction in the body due to histamine, superior wax selection yields better results. Unfortunately, poor wax quality is frequently to blame for post-waxing soreness and irritation.

Select a high-quality wax whenever possible.

Allergen-free wax is the key to resolving any problems with sensitive skin.

Waxing sensitive skin, or any skin type, with hypoallergenic, high-quality wax is a terrific way to go! For a better understanding, hypoallergenic refers to something unlikely to trigger an allergic reaction. This wax is perfect for sensitive regions, including brows, underarms, and Brazilian waxing.

A client may believe they are allergic to the wax when, in fact, it is the body's natural histamine response. In addition, in most cases, hypoallergenic wax is free of rosin and beeswax, two components that might induce sensitivity in some people while not affecting others.

Hard wax is removed without the need for strips and adheres to the hair rather than the skin. Ideal for those with delicate skin or who want a more relaxing experience. Hard wax also does not leave a sticky mess on the skin!!

In addition to selecting a hypoallergenic wax, use a pre-wax cleanser to cleanse the skin before and after waxing.

Avoid using oil in these areas, but instead, use a Post Refreshing Gel to soothe the skin. A cold compress, jade roller, or chilling globe used after waxing but before applying post-waxing cooling gel is also beneficial. To avoid post-waxing acne, prescribe at-home exfoliating for significant body parts prone to breakouts, such as the back.

Waxing has several advantages over other hair removal methods. It's an excellent way to get rid of a lot of hair in a short length of time. Hair in waxed places does not grow back for two to eight weeks, making it a long-lasting procedure. Hair is removed from the surface rather than the root when shaved or removed with a depilatory lotion. The hair can return to the surface within a few days. Hair tends to grow back in a rough stubble when using these treatments. Regrowth in areas that have been waxed several times over a long period is frequently softer. Allow us to provide you with smooth, hair-free skin!

My skin is very sensitive. This blog is very useful for me. Now, I can easily wax my skin to get rid of unwanted hair.

Thank you for requesting a call back , you shall receive a call from one of our staff member to confirm your appointment.

Our mission is to provide you a professional affordable price with world class product with expert beautician to serve you a high level of satisfaction at your doorstep.